Though the Sex Pistols became the most publicized of all the original London punk groups, forming and playing before everyone else, the Damned actually ended up scoring most of the firsts on its own, notably the first U.K. punk single — “New Rose” — in 1976 and the first album, Damned Damned Damned, the following year.

Produced by Nick Lowe, both were clipped, direct explosions of sheer energy, sometimes rude but never less than entertaining.

The group ended up sacked from the Pistols’ cancellation-plagued full U.K. tour after only one show, but rebounded with an opening slot on the final T. Rex tour, while further tweaking everyone else’s noses by being the first U.K. act to take punk back to America via a New York jaunt.

Things started to get fairly shaky after that, however, with Lu Edmonds drafted in on second guitar and plans for the group’s second album, Music for Pleasure, not succeeding as hoped for.

The members wanted legendary rock burnout Syd Barrett to produce, but had to settle for his Pink Floyd bandmate Nick Mason.

The indifferent results and other pressures convinced Scabies to call it a day, and while future Culture Clubdrummer Jon Moss was drafted in to cover, the group wrapped it up in early 1978.

We stock some awesome The Damned Band Concert Posters. 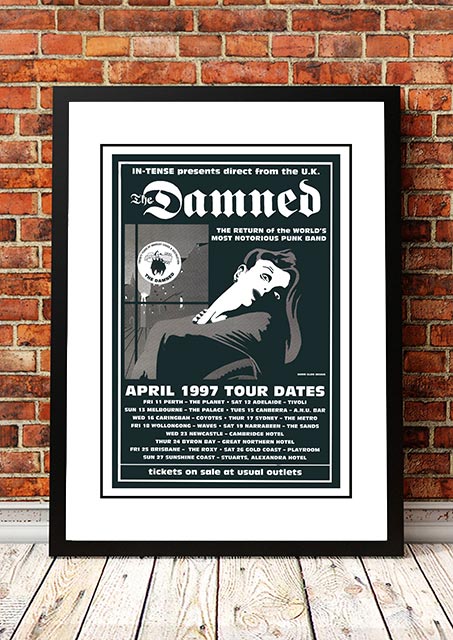