Combining infectious melodies, a witty sense of humor, and a vaguely avant-garde aesthetic borrowed from the New York post-punk underground, They Might Be Giants reinvented themselves throughout their career. Musically, John Flansburgh and John Linnell borrowed from everywhere, but this eclecticism was enhanced by their arcane sensibilities.

The duo referenced everything from British Invasion to Tin Pan Alley, while making allusions to pulp fiction and President Polk. Through their string of indie releases and constant touring, They Might Be Giants built up a huge following on college campuses during the late ’80s, switching to a major label in the early ’90s.

With support from MTV, 1990’s Flood became a gold album, and with it, the duo began to reap commercial rewards, moving into the status of one of the most popular alternative bands before grunge.

Though the group retreated to its cult following in the mid-’90s, when an avalanche of post-grunge groups dominated MTV and modern rock radio, the 2000s and 2010s found them thriving, with well-received forays into children’s music and soundtracks, as well as acclaimed albums for their adult fans.

We stock some awesome They Might Be Giants Band Concert Posters. 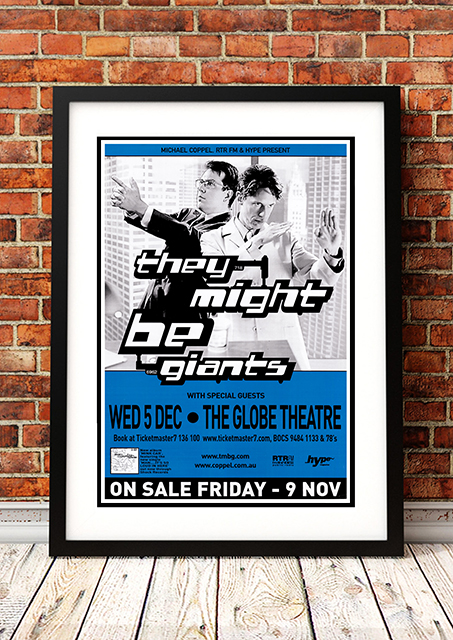