Within the space of three albums, Powderfinger emerged as one of Australia’s most popular radio-friendly rock bands.

They hail from Brisbane, famous for its sub-tropical climate and its often ultra-conservative “deep north” politics.

The band grew out of a three-piece, becoming Powderfinger in 1990 with the addition of two more members, including singer/guitarist Bernard Fanning.

They cut their musical teeth performing cover versions of classics by Neil Young (taking their name from one of Young’s songs), the Rolling Stones, the Doors, Led Zeppelin, Steppenwolf, and Rodriguez.

In the beginning, the group promoted their own gigs, posted their own flyers, and then put their earnings into 1,500 copies of a self-titled EP.

The second EP Transformer was highlighted by “Reap What You Sow,” a song featuring harmonies and showing off Fanning’s soulful voice — a taste of things to come.

The band was signed to Polydor Records, Australia, and their major-label debut album Parables for Wooden Ears followed in August 1994.

Produced by Tony Cohen (Nick Cave and the Bad Seeds, the Cruel Sea), this album emphasized the band’s heavier side.

A Top Ten seller in their home state, the album launched Powderfinger nationally, thanks also to a bout of constant touring.

After a creative hibernation and two CD EPs, recording started for the second album, the breakthrough Double Allergic, which revealed a significant shift towards accessible rock songs rooted in melodic grooves.

The singles “Pick You Up” and “DAF” (which stands for the first three chords of the song) picked up strong airplay support.

The album went straight to the Top Ten in September 1996, sold double platinum, and spent half a year in the Top 30.

The follow-up album Internationalist was released two years later in September 1998, entered the charts at number one, and was still charting a year later when it landed the band a handful of ARIAs, Australia’s annual industry awards.

On a roll with September releases, 2000’s Odyssey #5 again went straight to number one, became the group’s biggest selling album with sales in excess of five platinum awards, and at the end of 2000, secured the band worldwide releases.

We stock a great range of Powderfinger band concert posters. 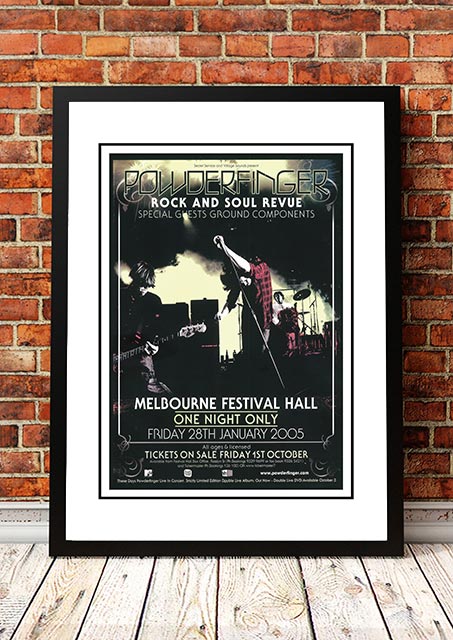