Hilltop Hoods formed in Adelaide in 1993. MCs Suffa and Pressure met as classmates at Blackwood High School, recruiting DJ Next through a mutual friend.

While inspired by American conscious rap icons like Public Enemy and KRS-One, Hilltop Hoods took their name from the Hilltop, the nickname given the suburb where Suffa and Pressure were raised.

Their debut EP, Back Once Again, appeared in 1997, and two years later the trio issued their first full-length effort, A Matter of Time. Upon completing the album, DJ Next relocated to Sydney, and with the addition of DJ Debris, Hilltop Hoods recorded 2001’s Left Foot, Right Foot.

In 2007, they teamed up with the Adelaide Symphony Orchestra for The Hard Road: Restrung, an orchestral reinterpretation of their ARIA Award-winning album. Hilltop Hoods‘ fifth LP, State of the Art, faced more anticipation than they’d previously received in their career.

Upon release in 2009, it not only debuted at number one in Australia but reached double-platinum status on the backs of two hit singles, “Chase That Feeling” and “Still Standing.” State of the Art was also the Hoods‘ first album released on their Golden Era Records label, whose roster included Vents, Briggs, Funkoars, and K21.

Continuing on the trio’s album-every-three-years schedule, Drinking from the Sun appeared in 2012, becoming their third consecutive chart-topper.

The album featured collaborations with a pair of American rap luminaries, Black Thought from the Roots and Chali 2na from Jurassic 5, as well as fellow Aussie Sia on the hit track “I Love It.”

In 2014, the single “Won’t Let You Down” heralded the August release of their seventh album, Walking Under Stars, which again topped the Australian charts. Their next single, “Cosby Sweater,” became the group’s first to reach the Top 5 of the ARIA singles chart, helping them win an ARIA award for Best Urban Album that same year.

In 2016, the group once again collaborated with the Adelaide Symphony Orchestra, this time reinventing tracks from both Walking Under Stars and Drinking from the Sun as the new Restrung release.

The album also featured new tracks, two of which charted on the ARIA Top 10: “Higher” featuring James Chatburn and “1955” with Montaigne and Tom Thum.

Hilltop Hoods returned in 2018 with the single “Clark Griswold,” an ode to the fictional ’80s movie dad featuring Adrian Eagle. 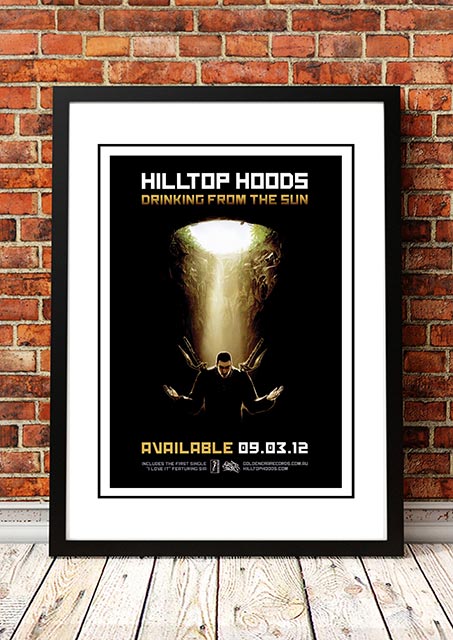