Small Faces were the best English band never to hit it big in America.

Outside Europe, all anybody remembers them for is their sole hit, “Itchycoo Park,” which was hardly representative of their psychedelic sound, much less their full musical range.

But in England, Small Faces were one of the most extraordinary and successful bands of the mid-’60s, serious competitors to the Who and potential rivals to the Rolling Stones.

Lead singer/guitarist Steve Marriott‘s formal background was on the stage; as a young teenager, he’d auditioned for and won the part of the Artful Dodger in the Lionel Bart musical Oliver!

Marriott was earning his living at a music shop when he made the acquaintance of Ronnie Lane (bass, backing vocals), who had formed a band called the Pioneers, which included drummer Kenney Jones.

Lane invited Marriott to jam with his band at a show they were playing at a local club — the gig was a disaster, but out of that show the group members decided to turn their talents toward American R&B.

The band, with Marriott now installed permanently and Jimmy Winston recruited on organ, cast its lot with a faction of British youth known as the mods, stylish posers (and arch enemies of the leather-clad rockers, sometimes with incredibly violent results) who, among their other attributes, affected a dandified look and a fanatical embrace of American R&B.

The quartet, now christened Small Faces (“face” being a piece of mod slang for a fashion leader), began making a name for themselves on-stage, sparked by their no holds barred performance style.

Marriott had a uniquely powerful voice and was also a very aggressive lead guitarist, and the others were able to match him, especially Jones, who was a truly distinctive drummer. 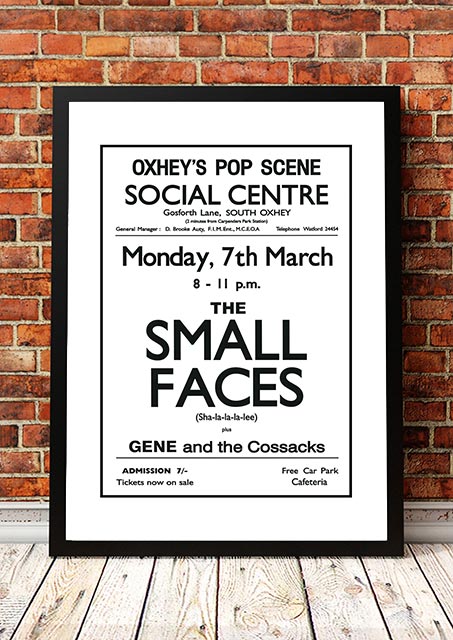