One of England’s most enduring hard rock bands, Hawkwind were formed in London during the late ’60s, just as art rock was coming into its own.

Though lesser known than contemporaries like Pink Floyd, the band is widely hailed as one of space rock’s early pioneers, thanks to seminal albums like 1973’s live opus Space Ritual, and its 1974 studio follow-up In the Hall of the Mountain Grill.

Their potent mix of psychedelia, prog, straight-ahead hard rock, and lyrics steeped in science fiction — particularly the themes and imagery of author Michael Moorcock, who also became a member at various points — and drug effects helped define Hawkwind and separate them from the competition.

The group’s history has been marked by a series of confusing lineup changes, as members began an almost revolving-door relationship with the band virtually from the outset.

Throughout their many decades and incarnations, founding guitarist Dave Brock has remained Hawkwind’s chief steward, while notable players like Lemmy and Ginger Baker have also enjoyed stints with the band. While the ’70s are widely considered to be their heyday, Hawkwind have retained a loyal following and enjoyed periodic surges of popularity, in the ’80s with the Moorcock-inspired concept album The Chronicle of the Black Sword and in the ’90s with their embrace of rave culture and electronica on albums like Space Bandits.

The 2000 reunion event Hawkestra saw the coming together of multiple eras of Hawkwind personnel and begat Space Ritual, a spin-off group of former members. Space Ritual competed with Brock’s ongoing versions of Hawkwind, who continued to release both new and archival material throughout the decade.

A contract with Eastworld Records in 2010 seemed to renew Hawkwind’s commitment to new material, as they entered another prolific streak that included the 2016 concept album The Machine Stops and its 2017 sequel, Into the Woods. 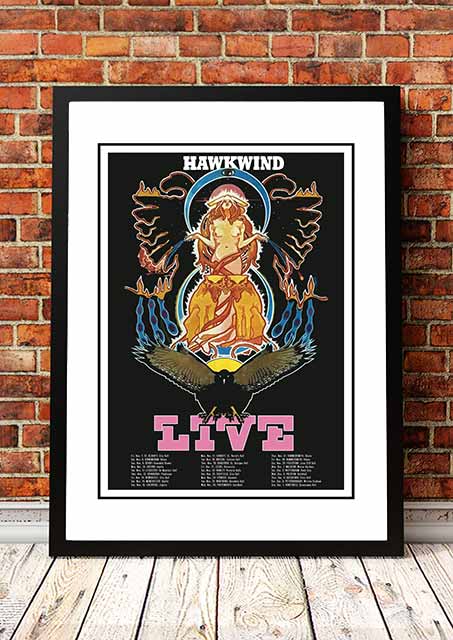