Kelly Clarkson rose to fame in 2002 after winning the first season of American Idol.  Her debut single, “Before Your Love”/”A Moment Like This”, topped the Billboard Hot 100 chart and became the best-selling single of 2002 in the United States.

Clarkson’s debut studio album, Thankful (2003), debuted at No. 1 on the Billboard 200. It was certified double platinum by the Recording Industry Association of America (RIAA) while selling over 4.5 million copies worldwide. Its lead single, “Miss Independent,” reached the top ten in various nations.

Trying to reinvent her own image, Clarkson developed a rock-oriented sound for her second album, Breakaway (2004). It sold over 15 million copies worldwide and earned Clarkson two Grammy Awards. Her third album, My December (2007), Clarkson served as the executive producer and co-wrote the entire album’s material.

Clarkson’s fourth album, All I Ever Wanted (2009), became her second album to debut at No. 1 on the Billboard 200. Its lead single, “My Life Would Suck Without You”, holds the record for the biggest jump to number one on the Hot 100.

Clarkson’s fifth studio album, Stronger (2011), won the Grammy Award for Best Pop Vocal Album, making her the only act to receive the award twice. The album scored her third number-one song on the Hot 100, “Stronger (What Doesn’t Kill You)”.

Clarkson’s sixth album and first Christmas music release, Wrapped in Red (2013), became the best-selling holiday album of the year, making her the first American female artist to achieve this goal. In 2015, Clarkson released her seventh studio album, Piece by Piece, which was her third album to debut at No. 1 on the Billboard 200. Its title track, became her eleventh top-ten entry on the Hot 100.

We stock a couple of awesome Kelly Clarkson Concert Poster from her Australian Tour in 2005 and 2008. 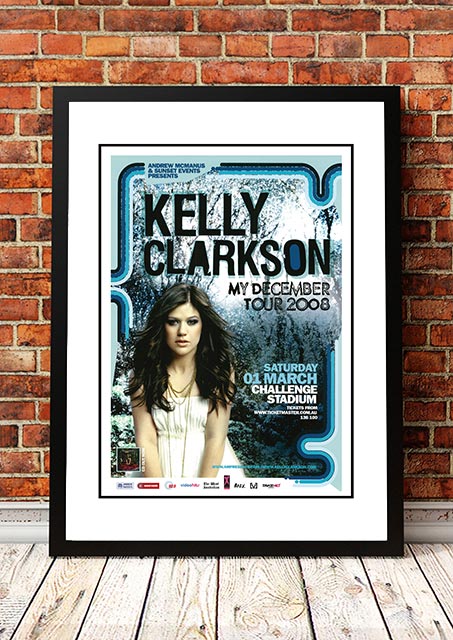 Kelly Clarkson ‘My December’ Perth, Australia 2008
Back To Top
×