After gaining a foothold in the contemporary Christian music scene, Switchfoot went mainstream with 2003’s The Beautiful Letdown, a double-platinum album that straddled the line between sacred and secular rock music.

Years before Switchfoot‘s commercial breakthrough, though, the group struggled to make a dent in the San Diego area, where singer/guitarist Jonathan Foreman, bassist Tim Foreman, and drummer Chad Butler began playing together in 1996.

The lineup logged several shows under its original name, Chin Up, before adopting the Switchfoot moniker and attracting the attention of singer/songwriter Charlie Peacock. Although Peacock signed the band to his own label, Re:Think, Switchfoot were moved over to the roster of Sparrow Records following Sparrow’s acquisition of the smaller label.

Now signed to one of the largest Christian labels in the country, Switchfoot temporarily tabled their plans to reach out to a broader audience. Their first two albums, The Legend of Chin and New Way to Be Human, were marketed almost exclusively toward Christian listeners, who took an immediate shine to the band’s music.

Breathe became a transitional record for the group, earning a Grammy nomination for Best Rock Gospel Album and selling over 500,000 copies, thus achieving gold status. Its success, coupled with the band’s presence on the hit soundtrack to the 2002 film A Walk to Remember, set Switchfoot up for a healthy major-label run. 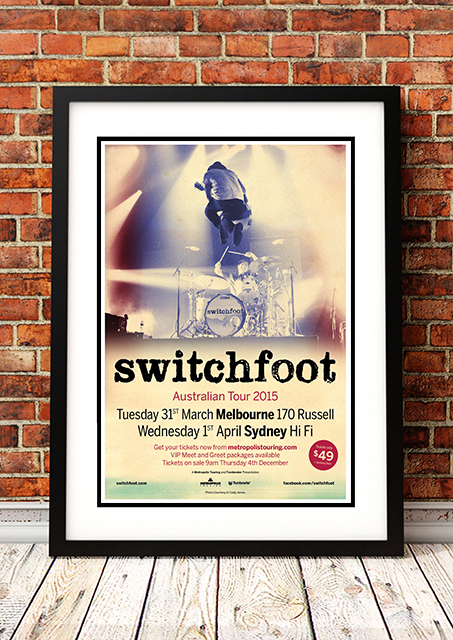 Switchfoot – Australian Tour 2015
Back To Top
×