American singer/songwriter Bruno Mars is a Grammy-winning artist who got his start crafting hits for other artists before taking off on his own highly successful trajectory.

An all-around entertainer, he also plays multiple instruments, produces, and choreographs. His path to mainstream success was lengthy. After working a string of behind-the-scenes jobs — writing songs for Brandy, singing backup for Sugababes, impersonating Elvis — he put his name on top of the Billboard Hot 100 by co-writing Flo Rida and Kesha’s “Right Round.”

One year later, he collaborated with rapper B.o.B for “Nothin’ on You” and co-wrote Travie McCoy’s “Billionaire,” both of which became Top Ten hits. Mars used that momentum to launch a solo career and become the first male vocalist in two decades to crack the Top Ten with his first four singles.

Born Peter Hernandez in Honolulu, Hawaii, Mars kicked off his career at the age of four by fronting his uncle’s band, becoming Oahu’s youngest Elvis impersonator in the process.

Ten years later, he was impersonating the King of Pop, Michael Jackson, as part of the Legends in Concert show.

After graduating high school in 2003, he took his uncle’s advice and moved to California to pursue a music career.

He eventually met songwriter Phillip Lawrence, who convinced Mars to try his hand at writing songs for other artists.

The two dubbed themselves the Smeezingtons and co-wrote Brandy’s “Long Distance.”

The duo scored their first number one hit in 2009, when they co-authored Flo Rida’s international smash “Right Round.” 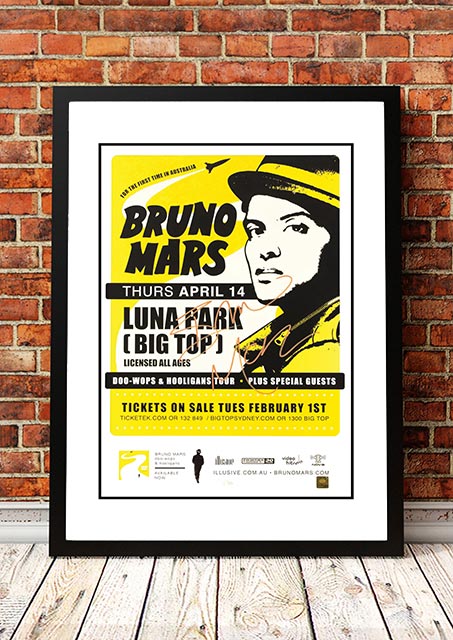