The Yardbirds are mostly known to the casual rock fan as the starting point for three of the greatest British rock guitarists: Eric Clapton, Jeff Beck, and Jimmy Page.

Undoubtedly, these three figures did much to shape the group’s sound, but throughout their career, the Yardbirds were very much a unit, albeit a rather unstable one.

And they were truly one of the great rock bands; one whose contributions went far beyond the scope of their half dozen or so mid-’60s hits (“For Your Love,” “Heart Full of Soul,” “Shapes of Things,” “I’m a Man,” “Over Under Sideways Down,” “Happenings Ten Years Time Ago”).

Not content to limit themselves to the R&B and blues covers they concentrated upon initially, they quickly branched out into moody, increasingly experimental pop/rock.

The innovations of Clapton, Beck, and Page redefined the role of the guitar in rock music, breaking immense ground in the use of feedback, distortion, and amplification with finesse and breathtaking virtuosity.

With the arguable exception of the Byrds, they did more than any other outfit to pioneer psychedelia, with an eclectic, risk-taking approach that laid the groundwork for much of the hard rock and progressive rock from the late ’60s to the present.

No one could have predicted the band’s metamorphosis from their humble beginnings in the early ’60s in the London suburbs as the Metropolis Blues Quartet.

By 1963, they were calling themselves the Yardbirds, with a lineup featuring Keith Relf (vocals), Paul Samwell-Smith (bass), Chris Dreja (rhythm guitar), Jim McCarty (drums), and Anthony “Top” Topham (lead guitar). The 16-year-old Topham was only to last for a very short time, pressured to leave by his family. His replacement was an art-college classmate of Relf‘s, Eric Clapton, nicknamed “Slowhand.”

The Yardbirds quickly made a name for themselves in London’s rapidly exploding R&B circuit, taking over the Rolling Stones‘ residency at the famed Crawdaddy club.

The band took a similar guitar-based, frenetic approach to classic blues/R&B as the Stones, and for their first few years they were managed by Giorgio Gomelsky, a colourful figure who had acted as a mentor and informal manager for the Rolling Stones in that band’s early days. 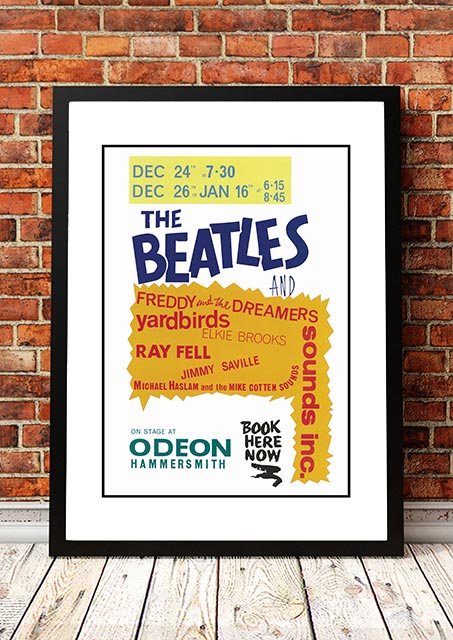 The Beatles / Freddy and the Dreamers / The Yardbirds ‘Hammersmith Odeon’ London, UK 1964
Back To Top
×