The project’s origins date back to Homme, who in the wake of Kyuss’ 1995 demise relocated to Seattle to tour with the Screaming Trees; he soon began working with a revolving lineup of musicians including the Trees’ Van Conner, Soundgarden’s Matt Cameron, and Dinosaur Jr.’s Mike Johnson, recording a series of 7″s originally issued under the name Gamma Ray.

After rechristening the group Queens of the Stone Age, Homme recruited Hernandez to begin work on their self-titled debut LP, issued in late 1998 on Loosegroove; after the album was completed, Oliveri left the Dwarves to rejoin his former bandmates, with the subsequent addition of Catching rounding out the roster.

In addition to extensive touring, Homme put together a series of albums for the indie label Man’s Ruin; the various volumes of the Desert Sessions feature Homme’s collaborations with a loose-knit lineup of like-minded musicians, some from bands like Soundgarden, Fu Manchu, and Monster Magnet.

We stock some awesome Queens of the Stone Age Band Concert Posters. 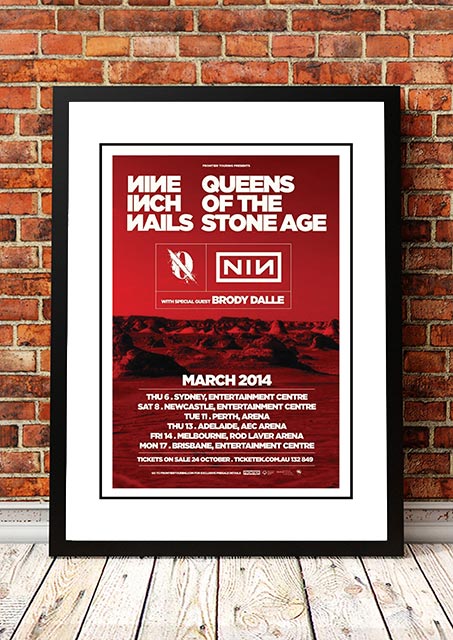