Chuck Berry melded the blues, country, and a witty, defiant teen outlook into songs that have influenced virtually every rock musician in his wake.

In his best work — about 40 songs (including “Round and Round,” “Carol,” “Brown Eyed Handsome Man,” “Roll Over Beethoven,” “Back in the U.S.A.,” “Little Queenie”), recorded mostly in the mid- to late 1950s — Berry matched some of the most resonant and witty lyrics in pop to music with a blues bottom and a country top, trademarking the results with his signature double-string guitar lick.

Presenting Berry the prestigious Kennedy Center Honors Award in 2000, President Bill Clinton hailed him as “one of the 20th Century’s most influential musicians.”

We stock an awesome Chuck Berry Print featuring the Keystone Angels as support. They later went on to become The Angels (Angel City). 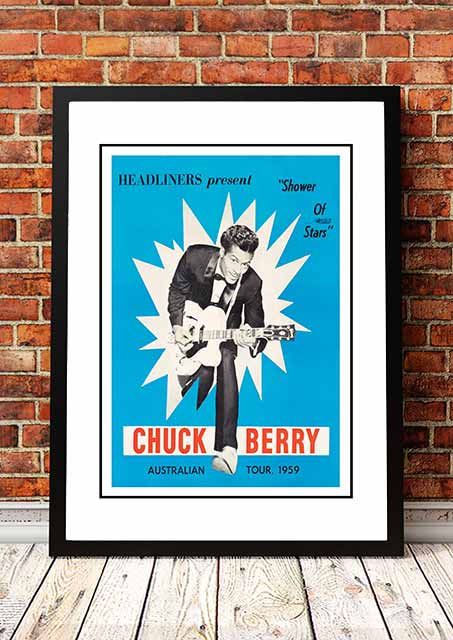