Adams was given his first guitar at age ten. He left school at 15, joined a band as a singer and went on the road. He has released 14 albums since then.

In 1990 he joined many other guests (including Michael Kamen) for Roger Waters’ massive performance of The Wall in Berlin. Apart from that he is engaged in many charity projects like Greenpeace’s ‘Saving the Whales’ or Amnesty International. He recently joined Canada’s benefit concert for the tsunami victims.

One of his most popular success was the album Waking Up the Neighbours in 1991 featuring the ballad ‘(Everything I Do) I Do It for You’. This song was a huge #1 hit around the world. Other soundtrack songs were ‘Have You Ever Really Loved A Woman?’ from Don Juan de Marco; and ‘All For Love’ from The Three Musketeers, performed with Rod Stewart and Sting. Adams has been nominated for three Academy Awards.

His musical career also includes several collaborations and duets, e.g. with Tina Turner in ‘It’s Only Love’, Sarah McLachlan in ‘Don’t Let Go’, Mel C. in ‘When you’re Gone’, Chicane in ‘Don’t Give Up’, and the aforementioned collaboration on ‘All For Love’. 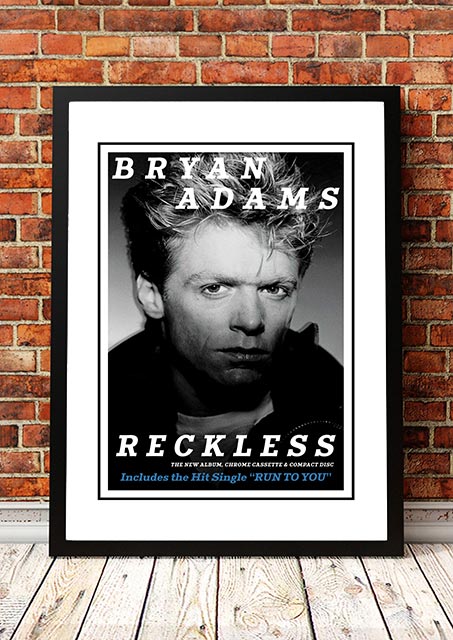 Bryan Adams ‘Reckless’ In Store Poster 1984
Back To Top
×