Dire Straits emerged during the post-punk era of the late ’70s, and while their sound was minimalistic and stripped down, they owed little to punk.

If anything, the band was a direct outgrowth of the roots revivalism of pub rock, but where pub rock celebrated good times, Dire Straits were melancholy.

Led by guitarist/vocalist Mark Knopfler, the group built their sound upon the laid-back blues-rock of J.J. Cale, but they also had jazz and country inflections, occasionally dipping into the epic song structures of progressive rock.

The band’s music was offset by Knopfler’s lyrics, which approximated the winding, stream-of-conscious narratives of Bob Dylan. As their career progressed, Dire Straits became more refined and their new maturity happened to coincide with the rise of MTV and the compact disc.

These two musical revolutions from the mid-’80s helped make Dire Straits’ sixth album, Brothers in Arms, an international blockbuster. The band — along with Eric Clapton, Phil Collins, and Steve Winwood — become one of the leaders of a group of self-consciously mature veteran rock & rollers in the late ’80s that designed their music to appeal to aging baby boomers.

Despite the band’s international success, they couldn’t sustain their stardom, waiting a full six years to deliver a follow-up to Brothers in Arms, by which time their audience had shrunk significantly. 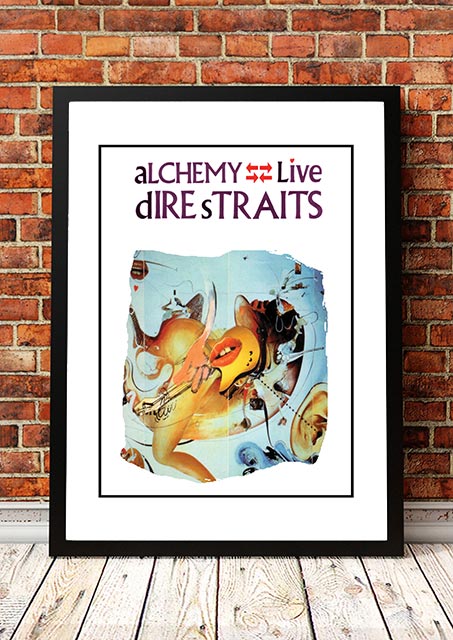 Dire Straits ‘Alchemy’ In Store Poster 1984
Back To Top
×