After disbanding the Police at the peak of their popularity in 1984, Sting quickly established himself as a viable solo artist, one obsessed with expanding the boundaries of pop music.

Sting incorporated heavy elements of jazz, classical, and worldbeat into his music, writing lyrics that were literate and self-consciously meaningful, and he was never afraid to emphasize this fact in the press.

For such unabashed ambition, he was equally loved and reviled, with supporters believing that he was at the forefront of literate, intelligent rock and his critics finding his entire body of work pompous.

Either way, Sting remained one of pop’s biggest superstars for the first ten years of his solo career, before his record sales began to slip.

Before the Police were officially disbanded, Sting began work on his first solo album late in 1984, rounding up a group of jazz musicians as a supporting band. Moving from bass to guitar, he recorded his solo debut, 1985’s The Dream of the Blue Turtles, with Branford Marsalis, Kenny Kirkland, and Omar Hakim.

The move wasn’t entirely unexpected since Sting had played with jazz and progressive rock bands in his youth, but the result was considerably more mature and diverse than any Police record.

The album became a hit, with “If You Love Somebody Set Them Free,” “Love Is the Seventh Wave,” and “Fortress Around Your Heart” reaching the American Top Ten.

Sting brought the band out on an extensive tour and filmed the proceedings for a 1986 documentary called Bring on the Night, which appeared alongside a live double album of the same name.

That year, Sting participated in a half-hearted Police reunion that resulted in only one new song, a re-recorded version of “Don’t Stand So Close to Me.” 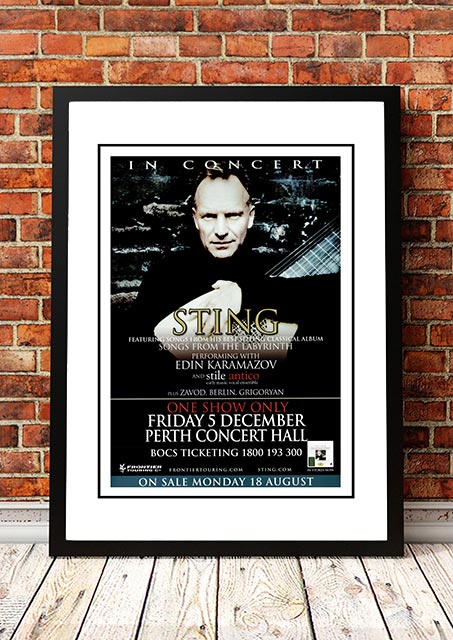 Sting ‘Songs from the Labyrinth’ Perth, Australia 2008
Back To Top
×